The Merciful God of the Conquest? 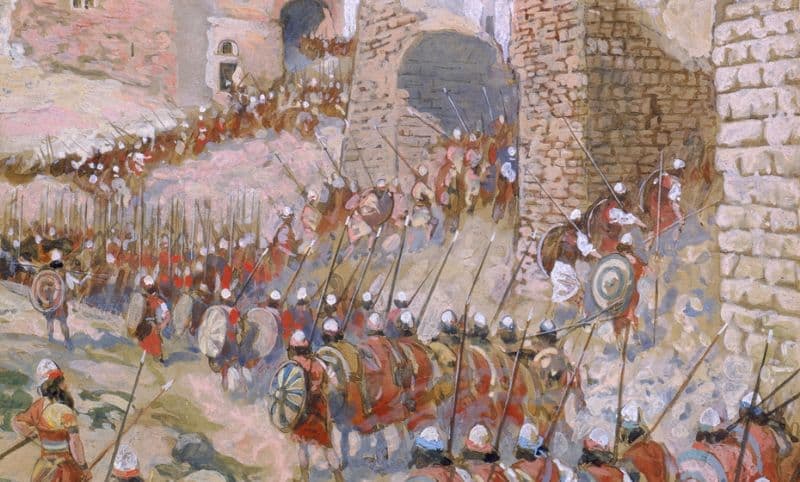 The story of the conquest of Canaan in Joshua is a central part of the biblical story of God’s salvation. However for many Christians, the portrayal of God in the conquest is one of the most difficult issues in understanding and using the Bible in the modern world. How can the picture of God commanding Israel to slaughter the Canaanites and show no mercy (Deut. 7:2; cf. 20:15-18) be reconciled with the picture of God in Christ who loved the world enough to die for it? There are no easy answers to such a difficult question, although there are ways to come to a better understanding of it.[1] This article will summarise one of them.[2]

When we read the story of the conquest in Joshua 1-12 carefully, one surprising thing is that the focus of the stories is not Canaanites being destroyed, but rather Canaanites being spared.[3] This is shown in two prominent stories.

Rahab, the Canaanite prostitute, hides the Israelite spies who stay with her. She defies her own people and king in order to side with the spies and with Israel (Josh. 2). As a result she and her family are spared when Jericho is destroyed and live among Israel ‘to this day’ (Josh. 6:22-25).[4]

The Gibeonites are a group who come to Israel, and trick Israel into making a covenant by pretending that they come from a far country rather than Canaan. When the Israelites find out they spare the Gibeonites albeit making them hewers of wood and drawers of water (Josh. 9, once again ‘to this day’ in v27).

Rahab and the Gibeonites give the same reasons for why they have sided with Israel and their God against their own people (Josh. 2:9-11; 9:10-11, 24): they have heard of what God has done for Israel and they know what God will do for Israel (give them the land). They know that they are under sentence of death, and they choose to respond proactively to seek to avert this.

In both cases they are accepted by Israel, even if in slightly dubious circumstances (Rahab lies for them, the Gibeonites lie to them). Most interestingly of all, in both cases there is no divine condemnation of Israel for sparing Canaanites.[5] Moreover, these are the only two groups of Canaanites who seek to side with Israel and Israel’s God in the book of Joshua. Therefore in Joshua’s story of the conquest, any Canaanite who comes to God is accepted, no matter how they come. [6] To paraphrase a later Joshua (Jesus), these stories seem to say that whoever asks, receives (even Canaanites).[7]

Are we surprised by this? We should be. God’s love, his unconditional love, should be surprising. Even Canaanites could be accepted, just as in the New Testament even prostitutes, tax collectors, and Gentiles (like us) could be accepted. If God is willing to show mercy to and accept these people, is there anyone who he would not accept?

But in another sense we shouldn’t be surprised, because the God of the conquest is the God of calvary. God’s amazing love flows throughout the Bible. It isn’t always easy to understand, just as the conquest isn’t easy to understand. However it forms part of the biblical witness to our God, who is love, who loves this sinful world, whose love endures forever, who loved the Canaanites, the Israelites, and loves me, you and everyone in this sinful world. And we are called to share in his love, to love a world that doesn’t deserve it, just as we do not. We love because he first loved us.

Image: The James Jacques Joseph Tissot, The Taking of Jericho, from The Old Testament, c. 1896-1902

[3] The destruction is mentioned, especially in 10:28-11:23. However, as Copan & Flannagan argue in chapters 6-9, this ‘war journal’ type of material is hyperbolic in nature (exaggeration for effect, as in Mt. 5:29-30) and should be understood as such. The focus of Joshua 1-12 is elsewhere.

[5] This is particularly striking when we contrast the story that comes between them: the Israelite Achan who breaks God’s command, leading to defeat at Ai (7:1-6). Israel have to purge Achan and all that he has from their midst (7:7-26) before God will give them victory at Ai (8:1-29). The story is explicit about the breaking of the command (the same command as in Deut. 7:2 & 20 albeit applied to items, not people), and the resulting divine condemnation (7:1-2; 10-15, 26). In contrast, in the stories of Rahab and the Gibeonites, not only is there no divine condemnation, but God actively intervenes to help Israel win the battles at Jericho and Gibeon (6:5, 20; 10:10-14), suggesting that he is not displeased by their actions. In contrast, Saul’s later attempt to wipe out the Gibeonites clearly meets with divine displeasure (2 Sam. 21:1-2). God does not want the Gibeonites to be wiped out.

[7] Matt. 7:8. (Jesus is a Greek form of Joshua.) These observations can help us to understand the story in Matt. 15:21-28. It is often seen as difficult because of Jesus’ initial words that seem to reject and insult the woman (vv24, 26). However v22 tells us that she was a Canaanite woman. For the original readers the more shocking point would be Jesus’ final words in verse 28. A Canaanite has great faith. A Canaanite receives what she asks for, even if initially it seems that she is not entitled to it.