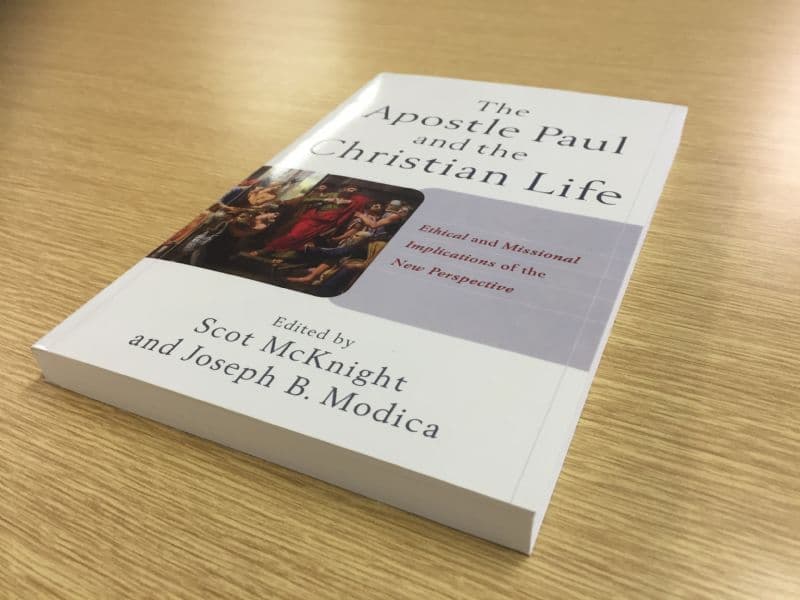 This article was published recently on Patheos website by Dr Scot McKnight. It is a review of a chapter in his book, "The Apostle Paul and the Christian Life''  which was written by our Principal Patrick Mitchel.

The New Perspective in Northern Ireland

Every time I look through the contributors to The Apostle Paul and the Christian Life: Ethical and Missional Implications of the New Perspective (ed. J. Modica, SMcK), I think that specific contributor’s essay was my favourite to read. Which brings to my “new favourite,” the essay by Patrick Mitchel, principal at Belfast Bible College and formerly at Irish Bible Institute. Mitchel brings a different angle — not just the Irish angle — to this discussion because he is a theologian and not a New Testament specialist. Patrick Mitchel fashions theology on the basis of Bible study (not just the history of dogmatics) and, adding spice to his theology, he’s got a great perception of narrative theology. Patrick loves Ireland and the churches of the Republic and Northern Ireland, and so he brings to this discussion about the Christian life and the new perspective fresh pastoral angles that cut into the fabric of national and social concerns.

Patrick brings this much needed freshness in the subtitle to his essay: “Solus Spiritus.”

Unlike other contributors to this volume, I have not written a book related to the apostle Paul. I write as a theology lecturer with particular interests in Christology and pneumatology, familiar with the issues raised by the NP and passionate about teaching and preparing students try in a post-Christendom culture on the western edge of Europe. I also write as a church person: an elder in a developing church-plant; a teacher  and preacher who—since the Pauline corpus makes up most of the New Testament—faces regularly the task of bridging the hermeneutical gap between Paul’s world and ours (71).

Hence, he says this about Paul later in his essay:

I like to think of Paul (and indeed all the writers of the New Testament) as an inspired reflective practitioner. I use the word inspired deliberately, to resist a reductionistic reconstruction of Paul that leaves little or no room for divine revelation to explain his transformation from persecutor to persecuted (83).

Here Mitchel enters into his expertise: how have the old perspective folks responded to the new perspective claims? First, there is a concern with how sinners are put right with God. E.g., that NT Wright focuses on the horizontal at the expense of the vertical (that is, inclusion of Gentiles in the church vs. being put right with God), future justification (it is said by critics of Wright) is tied to closely to a transformed life (in spite of Wright’s routine statements to the contrary), and Wright rejects the classic doctrine of imputation. The other major criticism has to do with divine and human agency. There is more to discuss here, but Mitchel is right: both sides bring important elements to the discussion, while the old perspective tends toward centralizing soteriology in a Reformed or Lutheran mode.

The “anxious Protestant principle” of not importing works into salvation has tended to marginalize what Paul has to say on the Christian life. In other words, the priority of how to “get in” has tended to make secondary the importance of the life lived once “in.” This is despite moral formation being the goal of Paul’s missionary work among his churches, as James Thompson has shown wonderfully well (81).

Another irony about old perspective criticisms of the new perspective not having enough emphasis on the Christian life — listen to these words from Mitchel:

The result, while certainly imperfect and open to criticism in places, has in my view forged fresh ways of appreciating the integration of the apostle’s theology with how it shapes his vision for the Christian life. Once we step back from the detailed arguments, I suggest that it is easier to see that the most significant contribution of the new perspective has been how it has acted as a catalyst for a renewed appreciation for the narrative coherence of Paul’s thought. This wider angle, in turn, helps to foster a renewed integration of Pauline theology and ethics and helps to focus attention on the purpose of justification within Paul’s ecclesiology, eschatology, and pneumatology (81).

These are powerful words that bring fresh insights into the entire debate, but what has to be observed here is that what Mitchel claims is that the new perspective, contrary to its sometime critics, sheds fresh light on how Paul envisions the Christian life! This is the reason this volume was produced, to show just that.

Here is Patrick Mitchel’s chart that maps Paul’s theology of the Christian life (and he offers observations showing no chart can contain it all):

Notice continuity, the covenant God makes with Abraham setting the Bible’s narrative, the importance of some discontinuity, the prominence of Spirit, and the pervasive reshaping under the influence of eschatology. This in contrast to the simplistic but appealing to some law vs. grace narrative/ideology that at times overrides all other themes.

With NT Wright, Mitchel observes a “restructuring” of monotheism, Torah and the people of God. Justification, too, then is inseparably linked to ethical transformation in the new age of the Spirit that generates transformation.

Used with permission from the author.

Scot McKnight is a recognized authority on the New Testament, early Christianity, and the historical Jesus. McKnight, author or editor of fifty books, is the Professor of New Testament at Northern Seminary in Lombard, IL.

Patrick has reviewed other chapters of this book on his blog which you can read at https://faithinireland.wordpress.com/2016/04/23/the-apostle-paul-and-the-christian-life-1/