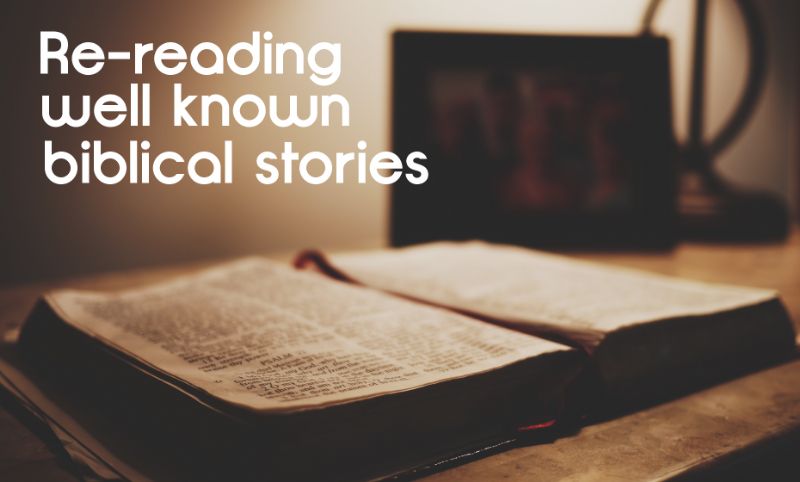 There are some stories in the bible that we know very well, having heard them from Sunday school onwards. This familiarity can sometimes be a problem, as we can lose the ability to be challenged or inspired by them.[1] How do we read such stories well?[2] As an example, let us think about a very well-known story: David and Goliath in 1 Samuel 17.

One key question to ask in reading the story is why David acted the way that he did. He is introduced in verses 12-20, not as a fighter (like his three eldest brothers) but as one bringing bread and cheese. Why, then, does this delivery boy ask about fighting Goliath (v26)? Why does he not accept Saul’s judgement that he cannot fight Goliath (vv31-37)? When he faces Goliath, the man who has terrified Israel’s fighting men for 40 days, why is he not terrified?

When reading an Old Testament story, two clues to help us find points of importance are repetition and speeches, especially at key moments.[3] What do David’s speeches tell us about why he acts as he does?

In his first speech in verse 26 he gives his reason for asking about fighting: ‘who is this uncircumcised Philistine to defy the armies of the living God?’ This is not just youthful bravado. Rather, David is the first person to bring God into the situation. Goliath called Israel ‘the servants of Saul’ (v8), Saul and Israel make no attempt to call on God that we hear. David, however, calls Israel ‘the armies of the living God’. This suggests that David has a different perspective. David sees God as relevant to the situation, even a situation as big as Goliath. As one commentator puts it:

Israel, who faces the Philistine threat in fear and immobility, acts as if God were irrelevant to the battle. If God is irrelevant in the face of the Philistines, all is lost for the Israelites. But David will not have it so. For David it is unthinkable to assess a battle (or anything else) apart from the rule of the living God.[4]

In verses 31-37 David faces Saul in a mini-climax. Saul rejects his offer on the basis that he has no experience (v33).[5] David responds that he does have experience, killing lions and bears (vv34-35). However he does not simply focus on his own ability, but on God who delivered him.[6] David is saying that he has experience of the power of God in previous situations. His faith that God, the living God, will deliver him in this situation is supported by what has previously happened. Moreover, he repeats the point that Goliath has defied God (v27).[7] As a result he chooses to step forward, in faith, into a new and difficult situation.

In verses 41-50 David faces Goliath in the main climax.[8] Goliath despises him, insults him and curses him by his gods (vv42-44). David starts his response with a contrast: ‘You come against me with sword, and spear and javelin, but I come against you in the name of the LORD of hosts, the God of the armies of Israel, whom you have defied.’ Goliath comes with state-of-the-art weaponry and armour (see the detail in vv5-7). David comes … in the name of God (whom Goliath has defied[9]). God will give Goliath over to David who will defeat him.

As a result two things will be known. Firstly everyone will know that there is a God in Israel (v46b); that this God lives, delivers, and is relevant to life. Secondly all those present will know something further: God does not save in the ways that we might expect, but in his own ways, as the battle (and every other situation) is his (v47). This is one answer to the possible objection ‘but God doesn’t always deliver like that!’ Indeed he does not. He delivers in ways that we do not expect. Who would have expected him to allow Israel to be terrified and insulted for 40 days? Who would have expected a young man with a sling to step forward and be the means of deliverance? Certainly not Eliab and Saul… (Who would have expected God to save through Calvary?)

There are many things in the world that defy God. This is the challenge of 1 Samuel 17 for us. David chose to confront this defiance (Goliath) through faith in God, the God who had delivered him, the God who is sovereign over every battle, every defiance. Will we choose to step forward in the same faith in the same God, whatever the situation may be?[10]

[1] Try this as a challenge for any well-known story: can you sum up its theology/message in one sentence?

[2] Alternatively for the preacher/small group leader, how do we help others read such stories well?

Stories are one of the largest biblical genres, and there are many ways in which we can learn to read them better. This article can only sketch the basics of one point (and is not a full exegesis). A couple of useful places to start are Fee, G.D. & Stuart, D. (2003) How to Read the Bible for All Its Worth. 3rd ed. Grand Rapids: Zondervan, chps. 5&7, or Duvall, J.S. & Hays, J.D. (2012) Grasping God’s Word. 3rd ed. Grand Rapids: Zondervan, chps. 15&18. Alternatively, come and do a course at BBC! J

[5] David is of fighting age, not a small child (despite many artistic depictions). The point here is that Goliath has been fighting since he is as old as David is now (a youth), whereas David has not fought.

[6] How did God deliver him? We are not told that God killed the lion and the bear ‘supernaturally’ (eg. struck by lightning) but that David struck them. However David saw the hand of God at work in this.

[7] Repetition is important (see above – note that I am repeating the point! J)

[10] The application ‘what is the Goliath in my life?’ (problems that I already have) slightly misses the mark. This wasn’t a problem that David was facing. Goliath was Saul’s problem. David was delivering bread. Nevertheless he chose to make it his problem, or rather to recognize that it was actually God’s problem (the one who was being defied).